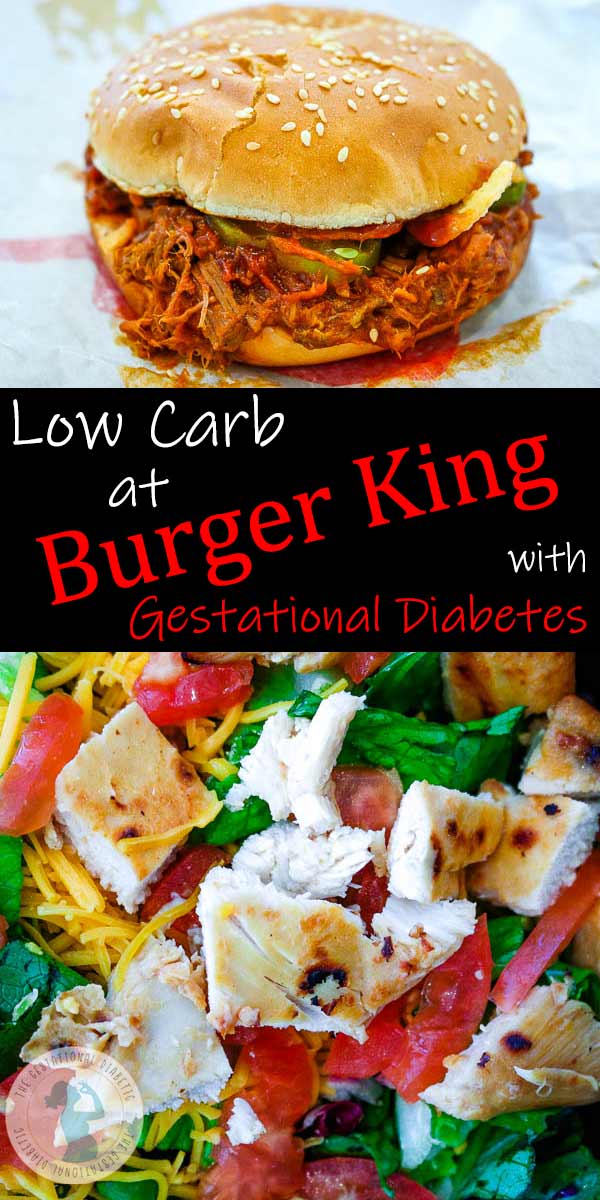 This low carb Burger King guide (with downloadable PDF) shows you how to enjoy BK guilt free with gestational diabetes.

This post may contain affiliate links of which I’ll earn a small commission from the seller’s profit if you purchase, but at no additional cost to you. I appreciate your support!

Hey Ladies! We are continuing with the low carb fast food series for gestational diabetes. If you want to get all of the available guides in one place, click here to create an account and they’ll be loaded to your profile.

Since you’re inquiring about this burger joint, you may be interested in the low carb options at McDonald’s and Wendy’s too.

So basically we stick to foods that are about 30g of carbs and drinks less than 10g of carbs because they’re digested more quickly.

This article will spell it all out for GD newbies, but if you have a good handle on the diet and just want a quick reference, click the link below to download the PDF.

The King does, however, have its own downloadable nutrition PDF here.

Like I mentioned, the online menu doesn’t allow us to see how many carbs are taken away when we toss half the bun, so the total carbs below are including the whole bun.

To enjoy these sandwiches for breakfast, toss half of the bun and you’ll sit at about 20g carbs (guesstimation of deducting about 1/3 of the carbs). This is OK for some moms, but keep in mind that the majority of these carbs are from white flour which is nutrient-empty and blood sugar spiking.

Since it’s breakfast you’ll want to be extra careful about the type and amount of carbs you eat, but you’ll never know what you can handle until you try. And sometimes you may be in a situation where fast food is the only option.

Just about all varieties of these sandwiches are the same when it comes to carb count, but some of them were left off because they were above 30g of fat (too much fat). If fat isn’t a concern for you, double that protein, girl!

As always, load up on extra veggies! You’ll pack in more nutrients and they’ll fill you up when you toss half of the bun. 🙂

Even out the protein to carb ratio a bit by tossing half of the bun; for sure on the Hamburger and Whopper Jr.

Keeping these items under 30g of carbs allows you to have carbs leftover for more nutritious and filling foods. Unfortunately, Burger King doesn’t have any to offer. Their only healthy side is applesauce, and that’s 9g of simple sugars that will break down quickly.

Instead, stop by a gas station for a veggie snack pack.

The protein to carb ratio needs to be evened out with these sandwiches too, but the nuggets and tenders are better options.

Keep in mind that the chicken fries, nuggets and tenders are without sauces.

Sauces are treated the same as drinks – stay under 10g of carbs. This is because your body processes liquids more quickly and you don’t want to waste your carbs on a drink and still be hungry with no carb allowance left.

That said, the only reason the BBQ sauce is included here is because it’s just one carb above the “limit” of 10g AND because it’s so popular – I figure most people would be curious.

The question is, do you want to “waste” 11g of your carbs on a sauce?

Save some carbs by getting the grilled chicken instead of the crispy.

Applesauce is the ONLY healthy side BK has, and the ONLY side under 30g carbs.

But even though the applesauce is healthy, it’s a simple sugar that will process quickly, so it’s really not the best side for this diet – especially considering that the other items you’ll be eating here are likely simple carbs too (buns, ketchup, etc.)

Make a quick stop by a gas station for a better side like a veggie pack, protein pack, cheese, or small whole fruit.

What Burger King foods have worked for you??
Comment below!