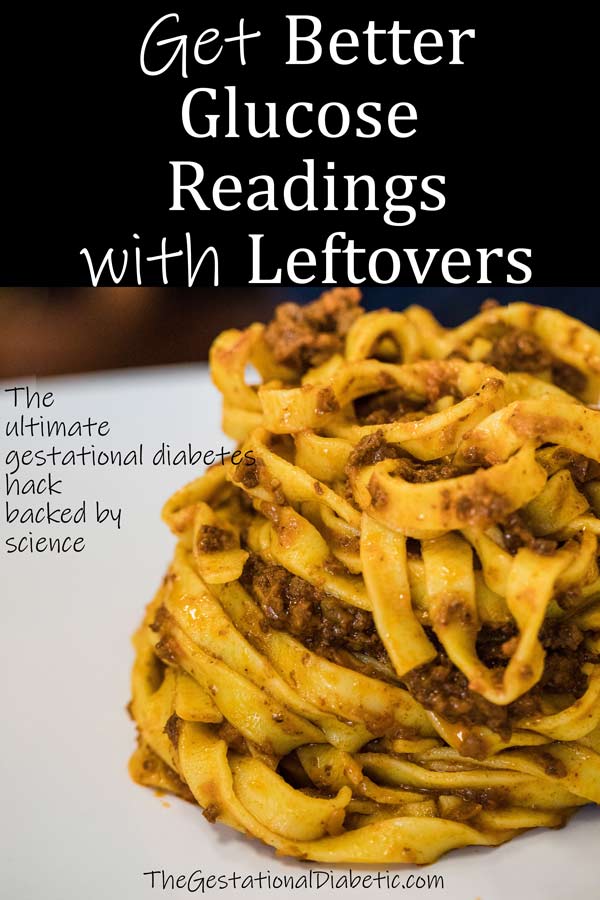 Enjoy pasta, potatoes, rice and more with the ULTIMATE GESTATIONAL DIABETES HACK with science to back it up!

Photo by Jason Leung on Unsplash

Some of the links on this page are affiliate links of which I’ll earn a small commission from the seller’s profit if you purchase, but at no additional cost to you. I appreciate your support!

Have you seen moms say that they got a better glucose reading the next day even though they ate the same exact thing? Well an experiment with leftovers showed it’s not just chance – there’s a scientific reason.

If you’re in any of the gestational diabetes support groups on Facebook you’ve probably seen moms baffled that they got better numbers after eating leftovers.

No has been able to really reason as to why it happened. Some even experimented and tried eating the same foods all day long (eliminating variables) and they found that they still got better numbers when eating leftovers.

All in all, they had no idea as to why leftovers gave better numbers. That’s completely understandable because so many factors affect blood sugar: stress, sleep, food, activity, hormones, etc.

I came across this article by BBC.com in 2014 that summarized an interesting experiment.

If you want to read the actual write up (easy read), click here.

A doctor and scientist-conducted experiment tested glucose response to pasta in different states: freshly cooked, cooled and reheated. (It led to an officially funded project by Diabetes UK)

The experiment found that “cooking pasta and then cooling it down changes the structure of the pasta, turning it into something that is called “resistant starch”.”

When any starchy food (pasta, potatoes, peas, etc.) is cooked and cooled, it becomes resistant to the normal enzymes in our gut that break down carbs and release glucose.

So what does all of this mean?

“According to scientist Dr Denise Robertson, from the University of Surrey, if you cook and cool pasta down then your body will treat it much more like fibre, creating a smaller glucose peak and helping feed the good bacteria that reside down in your gut.”

In other words, cold pasta won’t spike your blood sugar as high as freshly cooked pasta.

After each meal they had to test their blood sugar every 15 minutes for 2 hours.

The results were interesting!

Reheated pasta had the best (or lowest) affect on glucose.

“We’ve made a brand new discovery on Trust Me I’m A Doctor”, he says, “and it’s something that could simply and easily improve health. We can convert a carb-loaded meal into a more healthy fibre-loaded one instead without changing a single ingredient, just the temperature. In other words our leftovers could be healthier for us than the original meal.”

Since this discovery, Scientist Denise Robertson from the University of Surrey continued her research – funded by Diabetes UK – “looking at whether, even without other dietary modifications, adding resistant starch to the diet can improve some of the blood results associated with diabetes.” You can read more about it here.

Try it yourself! Come back and tell us how it went in the comments below.