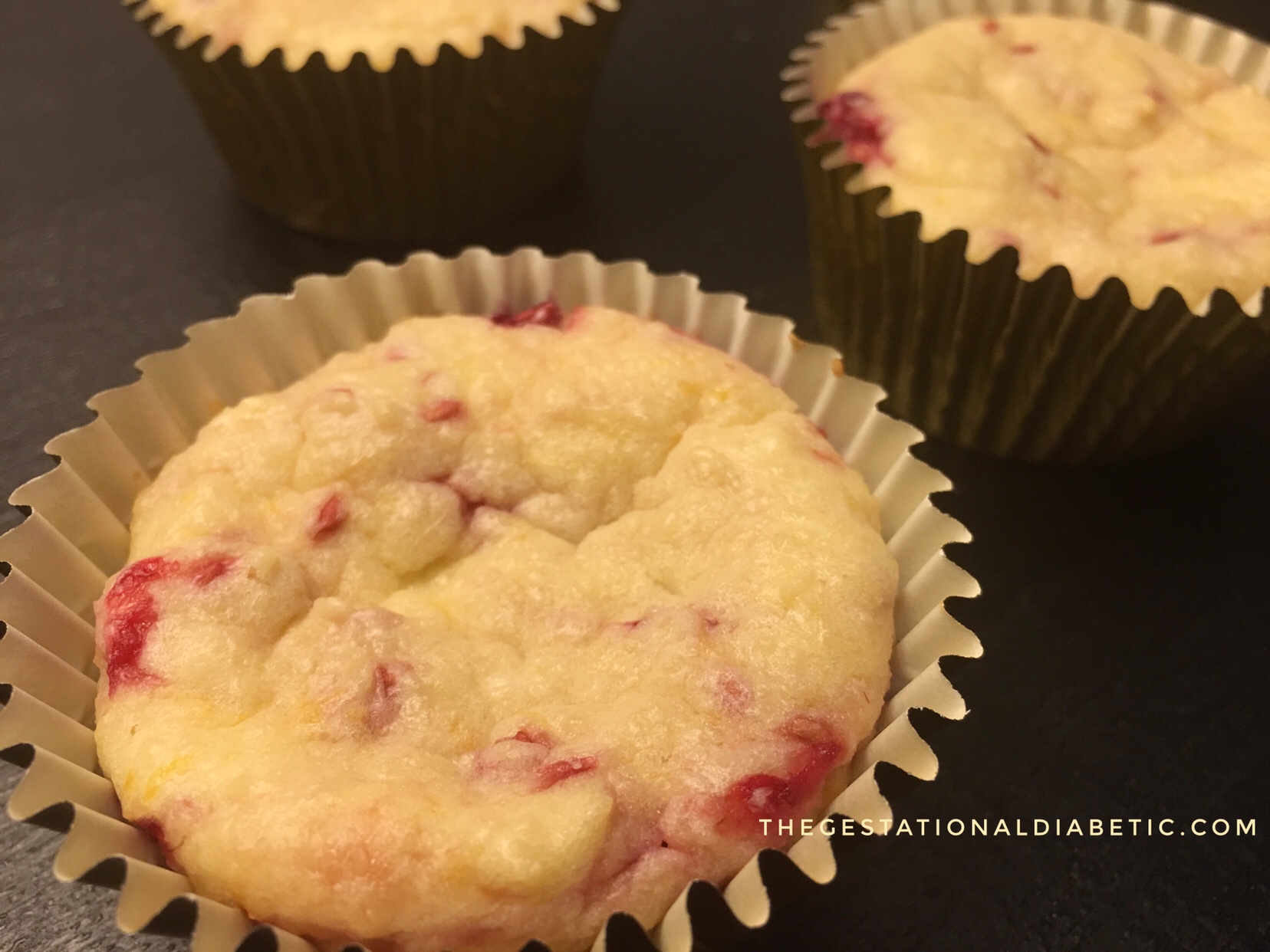 These Lemon Raspberry Cheesecake Cupcakes are as simple as can be, and they have only 3g carbs! Great for the gestational diabetes diet.

Cheesecake is one of the most ultimate indulgences. It’s rich and heavy and utterly comforting. Adding raspberry to the mix presents another delight to your taste buds and lemon cuts the richness just a bit to make a lighter feel, and it compliments the raspberry so well.

Not only are they simple and delicious, but cheesecake is the safe dessert of the gestational diabetes diet. What I mean by safe is that cheesecake is loaded with fat from the cream cheese, so as long as you don’t go heavy on sugar (and flour in some recipes) you’ll be able to enjoy a nice serving without guilt or worry.

The basic recipe has just 3 ingredients: cream cheese, sugar and eggs. So if lemon-raspberry doesn’t tickle you, try it plain or with other flavorings. Other good combinations are blueberry and lemon or strawberry and lime.

This recipe originally calls for ¼ c of sugar which helps the structure to not collapse. If using a sweetener that does not convert 1:1 for sugar, know that the middle of the cupcakes will be sunken in. The Almond Flour is an optional ingredient to prevent the sinking. But really, you could probably use regular sugar and not spike you blood sugar. Regular sugar works out to be about 4g per serving, which is 1 teaspoon’s worth. If you choose to use sugar, be mindful that there are sugars in the raspberries as well.

If you have it on hand, add ½ c of sour cream or Greek yogurt to achieve a creamier texture.

No base is needed, although you can make one, and no special cake pan.

If you don’t mind the texture, keep the raspberry seeds in the mix. They contain fiber, antioxidants and essential fatty acids. If you don’t want them, crush the berries in a fine sieve and just use the juice.

0 from 0 votes
Author — Traci
These Lemon Raspberry Cheesecake Cupcakes are as simple as can be, and they have only 3g carbs! Great for the gestational diabetes diet.
Prep Time10 minutes
Cook Time25 minutes
Total Time35 minutes
Print Recipe Pin Recipe Save RecipeClick to view saved recipes or meal plan
Choose the number of servings 12 cupcakes

Equipment: Oven, Mixer, Large Bowl, Small Bowl, Spoon, Rubber Spatula, Cupcake Pan, Cupcake Liners The raspberry seeds have fiber and other nutrients so it’s best to leave them in. If you don’t want them to effect the final texture, strain the juice from the berries and just use the juice.
How did yours turn out? Tag me!@TheGestationalDiabeticChef
Fully customizable recipe appWP Recipe Maker

Traci is a cookbook author, ex gestational diabetic, holistic nutritionist in training, and culinary arts graduate that is passionate about making your diagnosis as stress free as possible!